.Because, as all of London slept,
A spark from 'neath his oven lept.
(The maid, they say, must take the blame
For causing that initial flame).

His premises were soon alight,
And tongues of brightness licked the night.
There'd been no rain all summer long,
Winds from the east raged fresh and strong.

As Tom and all his household fled,
The fire to nearby houses spread.
The City's dry and cobbled maze
Was very quickly all ablaze.

Though was it Tom's fault? Some think not.
They say it was a foreign plot,
Not started by a single flare
But several other fires elsewhere..... 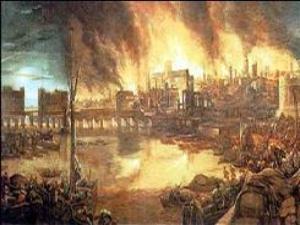