The Anglo-Saxons, Celts and Vikings - Part One

(This blog covers British history from about 410AD to 1066. It will be interrupted if anything of topical interest crops up whilst it is being serialized.) 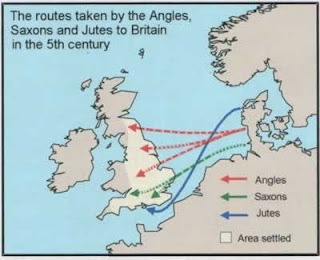 Towards the end of Roman rule
Germanic tribes first landed.
Some say they came peaceably,
And others say mob-handed.

There were Angles, Jutes and Saxons,
Both accounts may well be right:
The majority weren't hostile,
Whereas others came to fight.

The natives were bewildered,
And resisted where they could,
But they weren't equipped for battle,
So it didn't do much good.

The homelands of these strangers
Faced a constant flooding threat:
It's difficult to grow things
When the soil is very wet.

For easier conditions,
Is all that most were wishing.
In their new home they now settled down
To farming and to fishing...
Email ThisBlogThis!Share to TwitterShare to FacebookShare to Pinterest