We five friends all go way back to childhood,
We are sticking at "late middle age".
We're in regular touch and swap stories,
Of the "hold back the years" fight we wage.

Plaiting eyebrows and other such measures...
Our struggles to keep nicely thin...
Moustaches that seem to be growing,
Plus the stray wires that sprout from the chin.

We ask ourselves, "Does all this matter?
Does it bother us? Why should we care?"
But I knew that I had to try something,
To get rid of my fine facial hair.

So I went to the chemist's this morning,
Scanned the shelves and the stands and the racks,
Found a product that promised an answer:
It was boxed, and contained strips of wax.

The instructions were somewhat perplexing,
Though some drawings were there as a guide.
One lot fell in the bath and was useless,
But one length was duly applied.

I pressed this down gently but firmly,
Under nose and along upper lip,
Then got hold of the small tab of paper
Which, as promised, was "easy to grip".

I took some deep breaths for a minute
(As, for what lay ahead, one must brace,)
Next, I tugged hard - a single swift movement -
In that quest for a perfect bald face.

I winced at the burning sensation...
Checked the strip for the whiskers therein...
What I held now appeared to be empty -
With the residue stuck to my skin.

I opened an "aftercare" sachet -
One of four that my small kit supplied -
But the oil on the wipe was quite useless,
On the wax that had clumped up and dried.

Should I purchase my own special razor?
Shave each morning, in common with men.
Where I waxed is now sore, red and sticky,
And the verdict is "never again"!

Anyone know what this kitchen appliance does?

We cleared our kitchen cupboards,
Their contents to assess,
And found a strange appliance:
What it does we cannot guess.

This "thing" was made by Bauknecht
And, it seems, was rarely used.
We examined its components,
And they left us quite confused.

We checked on sundry retail sites.
Our gizmo can't be found.
It's a processor of some sort,
As a motor drives it round.

It contains a sort of basket,
In a top which has a spout.
There's a funnel (used to feed stuff in?)
But what on earth comes out?

There are sadly no instructions.
The machine was in no box.
And, until we find its purpose,
It will only serve to fox. 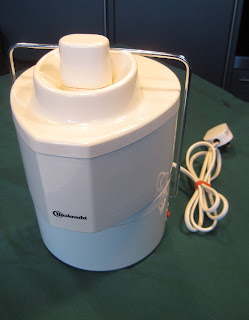 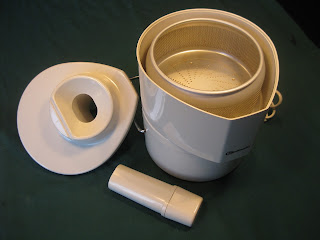 Email ThisBlogThis!Share to TwitterShare to FacebookShare to Pinterest
4 comments:

This month marks the 75th anniversary of one of the most daring raids of all time. It was an attack on the heavily fortified German-held port of St Nazaire in occupied France. This was the only Atlantic place large enough to accommodate German warships for repair : the damaged Bismarck had been heading there when she'd been sunk in May 1941. Meanwhile, the powerful Tirpitz was lurking in Norway...

Though the Bismarck is no more,
There's another man of war:
The Tirpitz just off Norway has remained.
There she stays, a fleet in being -
Our navy stops her fleeing,
But must tie up ships to make sure she's contained.

If she ventures from her lair,
She'd be shot, and need repair:
In just one Atlantic place she might be mended.
She would certainly head there:
It's the port of St Nazaire,
With its huge dry dock, all heavily defended.

Do the Brits have the ability
To strike this fine facility?
Soldiers manning massive guns are standing guard.
The entrance, closed and gated,
Cannot be penetrated...
Unless, maybe, it's hit by something hard?

This port must be attacked,
So the Campbeltown is packed
With explosives in a steel and concrete case.
By this heavy load encumbered,
This vessel's days are numbered.
It is hoped she will obliterate that base.

The Germans must not know
Of our plans to land a blow.
It's essential they are taken by surprise.
So the funnels she now bears
Make her look like one of theirs:
She will travel to her target in disguise.

Those who'll see this mission through
Have a lot of work to do.
They practise laying charges in the dark.
Once on land they will disperse
But beforehand must rehearse
Until, finally, they're ready to embark.

Those involved are highly skilled,
In their roles have been well drilled,
And courage isn't something that they lack.
Everyone could change his mind -
An offer all declined -
Although most of them would fail to make it back.

Five miles up the Loire...
All is going well so far
In what's shaping up to be a wartime thriller.
By a feat of navigation
They will reach their destination -
One big ship and an eighteen craft flotilla.

The whole schedule has been timed
And, with fuses duly primed,
The Campbeltown  now slams into the gate.
Once the entrance has been rammed,
Our ship is firmly jammed -
According to the plan, four minutes late.

Things have not gone undetected.
There's resistance, as expected.
Under fire, there is a tragic human cost.
They're in something of a scrape,
With no means of escape.
Almost every single little boat is lost.

Those who make it onto land,
Lay their charges, as was planned.
Some are captured and are out for the duration.
But the job has been well done.
Adolf Hitler this will stun,
So complete was the resultant devastation.

Once our big ship had impacted,
Local interest was attracted...
And occupying soldiers came to view.
On her decks, these Germans strode,
Unaware she would explode:
A massive bang the last thing that they knew.

This tale's a shortened version
Of a dangerous excursion,
And the full account is certain to enthral.
So meticulously planned,
By the bravest it was manned
And, in short, was dubbed "the greatest raid of all".