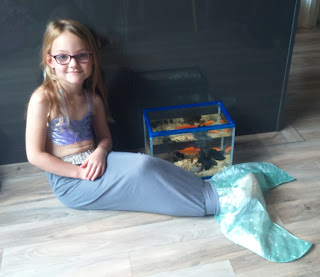 And Ella had got a request.
Could I make her an Ariel costume?
"Won't be easy" poor Granny confessed.

The girl had looked hopeful, asked nicely,
So Granny was somewhat beguiled.
It's hard to resist such a challenge,
And the pleas of a six year old child.

So out came the big bag of fabric,
Which Aunt Julie had kindly donated.
There was certainly plenty to work with,
For some of what must be created.

The green piece we found had the makings
Of the needed ethereal tail.
It had shiny white spots which were perfect
For the hint of a "here and there" scale.

A small bolt of purple was pounced on,
But we had to ring up Auntie Star,
Who confirmed that she had lots of buttons,
To decorate Ariel's bra.

Though the project was coming together,
The section from tail up to waist,
Presented a bit of a problem:
This conundrum now had to be faced.

It must provide room for manoeuvre,
But in parts must be quite snuggly fitted.
Rigid fabric could not be the answer,
It was wondered, "Could something be knitted?"

The wool drawer proved ever so boring.
Granny started to feel rather jaded.
She had to find some inspiration,
So her wardrobe was thoroughly raided.

In there were some grey harem trousers,
Which were clingy and showed "VPL".
Would she wear them again? Quite unlikely.
So she cut off one leg! May as well.

At this point proceedings were halted,
For a trip to the tip - such a thrill.
Then we visited seamstress friend Carol,
Who provided an unwanted frill.

The bra bit (mark one) had been strapless -
Slipped down and refused to comport.
So Mummy produced matching ribbon,
To lend it a bit of support.

The components were somehow assembled,
(Though the stitching at times wasn't neat).
And Ella's a great "Little Mermaid",
Now her very own outfit's complete.


Welcome to our new viewers from Kazakhstan and Bosnia & Herzegovina.
Your flags have been added to the Hello World blog:
http://www.baabaapinksheep.co.uk/2013/04/hello-world.html


My branch, of late, was somewhere
To which I rarely went.
Transactions would be done on line,
And cheques were always sent.

But the last two that I posted
Didn't reach their destination.
I rang the Natwest helpline.
Did they have an explanation?

The man said that they didn't.
Though we had a pleasant chat,
The bank was not responsible
And that, it seemed, was that.

Then my piggy bank I emptied:
Though the notion seemed quite strange,
In person I must now pay in
Some heavy bags of change.

But the building that was once my branch
Was functioning no more!
There were boards across the windows
And a chain across the door.

Natwest had not informed me.
With rage, I'm incandescent.
An address is on my cheque-book,
So is this now obsolescent?

My sort code's still relating to
A place that's disappeared.
I'm a branch-less homeless customer,
Which all seems very weird.

The perils of autocorrect

Autocorrect is useful,
If your spelling's not so good:
Errors will be rectified, 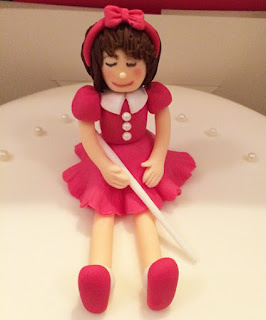 Words written as they should.

But the daughter of a lady
Who resides north of the border,
Was due to have a birthday,
So Mum texted through an order.

Atop the whole confection,
To complete the decoration.
A "wee blonde girl" should feature -
A clear specification.

But autocorrect knew better
And detected a mistake,
So what the mother wanted,
Didn't feature on the cake.

What sat there looking pretty
On the smoothly iced terrain,
Was a little dark haired lassie,
Who was blind and held a cane.

The cake was viewed with disbelief.
The whole thing seemed incredible,
But at least the girl was fondant,
So the sightless child was edible.

In the fight for Labour's leadership,
How will the voting go?
A survey says the favourite,
Is someone called "Don't Know"!
Email ThisBlogThis!Share to TwitterShare to FacebookShare to Pinterest
No comments:

Another place that thrived,
Has also not survived.
It was once the seat of Anglo-Saxon kings.
Dunwich was a port,
Where wool was sold and bought.
Now it's from the deep a sunken church bell rings.

When its river northwards wended,
It's raison d'etre ended:
As a major centre, Dunwich ceased to be.
Though its buildings still remained,
The defences weren't maintained,
And the town was at the mercy of the sea.

The North Sea's stomach's hollow;
Yet more land it seeks to swallow
To assuage what seems a never-ending thirst.
But schemes of reclamation
Can effect an alteration,
And the balance of the struggle is reversed.

When the Romans here were reigning,
In the Fens they started draining:
The area was sogginess and slosh.
Now there's solid fertile ground,
In the counties that surround
The square-mouthed shallow bay that's called The Wash.

What the sea seeks to purloin
Can be thwarted by the groyne,
A structure that projects out from the land.
It can act as an impediment,
By trapping drifting sediment.
Its height must be meticulously planned.

Revetments...tetrapods...
Aim at lengthening the odds
Of success, when tidal forces come a poaching.
"Hard" methods such as these,
(Plus the walls that block the seas),
Have all been tried to stop the waves encroaching.

But they can look quite unsightly,
So aren't undertaken lightly,
And by engineers aren't favoured as they were.
Sand dune augmentation
By the growth of vegetation,
And reshaping beaches: they're what some prefer.

Different methods man might juggle,
In this never-ending struggle:
Global warming has a lot to answer for.
With water levels rising
Clever measures need devising,
To repel the sea that's knocking at our door.

Our coastline isn't static
And the change can be dramatic,
For whole chunks of cliff can suddenly collapse.
Many factors are in play,
Which can cause rock to give way -
Like how soft it is and whether there are gaps.

Pounding waves can be invasive,
And churned up sand's abrasive,
The acidity of water can liquesce.
Any stone containing lime
Will dissolve if given time,
Which is why our seaboard's often under stress.

Attrition and corrosion
And corrasion cause erosion.
All are mainly due to how the sea behaves.
Its habitual predation
Can result in the creation
Of landforms - arches, tunnels, stacks and caves.

Mappleton's a village
Which the sea had sought to pillage:
The erosion rate just there was even faster.
Two million was expended
So the place could be defended:
Its inhabitants no longer face disaster.

But an engineered creation
Aimed at damage limitation,
Will often have the caveat "Beware!"
One location it protects
But there may be side effects,
By aggravating what occurs elsewhere.

So where the coast is battered
Land is worn away or shattered,
And human beings too have played their part.
Sand and gravel from one bay,
By the ton was dredged away
To extend some docks, which didn't prove that smart.

With its ever lowered beach,
Now Hallsands is in reach,
And its residents are driven to complain.
They fear their homes are fated
But the digging's unabated:
Only later does the company refrain.

There's a strengthened new sea wall,
But this doesn't help at all
And proves itself quite easily traversed.
Now there's not much to be seen,
For in 1917,
The elements combined to do their worst...