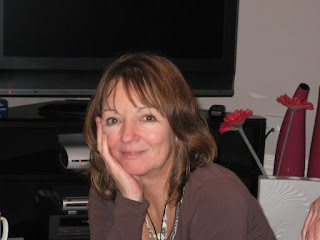 Maggie Ballinger was born in Crewe and brought up, along with a younger brother, in Morden, Surrey - a great location for a teenager in the sixties, with direct underground access to central London. She went to school in Mitcham, and her local social life centred on the church-hall rehearsals of an aspiring pop group - one of thousands which, according to her Dad, would never make it. The group’s name was Mud.
When she was growing up, her regular playmates were four girls of the same age who lived nearby. All five friends remain in almost daily touch after almost 70 years.

In the early 70s, she studied history at the Universities of East Anglia and London, and started work as an administrative trainee at Westminster Hospital, thereby beginning a lifelong career as a health service manager and HR specialist. Via posts in King’s Lynn and Leeds, she ended up in Sheffield in 1980. After planning, and seeing through, the merger of the city’s women’s services, she retired seventeen years ago.

Maggie began writing in the seventies, storing all her early manuscripts in a garden shed, where they were eaten by mice. A surviving verse about the death of a pet goldfish was turned into a stage act (performed with younger daughter Stephanie playing the eponymous Nigel) which, in 2010, reached the live audition stage of “Britain’s Got Talent” to universal derision. The act’s name - “The Dead Fish Poets' Society” - has since been adopted as the name of the publisher for Baa Baa Pink Sheep.

She is sometimes requested to write speeches (for weddings, charities etc) in verse, which is a good way of making even the most uninspiring material humorous. Arising from one such commission is a future project to determine exactly where the British north/south dividing line for pronunciation lies. The client pointed out that the words “laugh” and “half” don’t rhyme. Do they? Don’t they? It all depends on where you learnt to speak English.

Since childhood, Maggie has been a keen supporter of Crewe Alexandra Football Club - an enthusiasm shared by her architect husband Stephen. For several seasons, she wrote to Dario Gradi (then the club’s manager) with a critique in verse of almost every game, and was asked by BBC Radio Stoke to pen and read a poem about the opening of the new stand. The couple, who are learning the language and love all things Spanish, (except the food), are also aficionados of Atletico de Madrid.

Other hobbies include DIY/property renovation, music (song writing and playing piano), water colour painting, designing knitwear, and gardening (spindly sweet corn that keels over is a speciality). Childcare features regularly on her weekly agenda. Having recently had dental implants and swum with dolphins (or, rather, stood in water dodging the attentions of one over-friendly dolphin called Brenda), her remaining bucket list ambitions are to learn to tap dance and to play the violin (not necessarily with a view to doing both at the same time).

Having got part way through a history of Great Britain (in rhyme), only to discover it had already been done, she braved her fear of drowning and turned her attentions elsewhere. The result, published in 2019, was Britannia's Glory - A Maritime Story. This is a very long epic verse, telling the enduringly fascinating tale of Great Britain's seafaring history. It comprises 1,741 six line stanzas.
A new novel, entitled James the Third, was published on February 6th 2022 to coincide with the Queen's Platinum Jubilee. What if the Queen Mother had given birth to a baby prince in the later years of King George's reign? A sequel is already underway.
Other completed writing projects include Eliminate (the tale of a knock-out quiz series) and The Wish Gift, (in which chick-lit meets HG Wells). Both are awaiting their final edit.