Welcome to viewers from Peru, South Korea and Turkey. Your flags have been added to "Hello World". 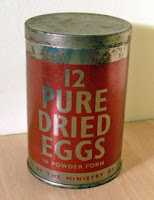 Were increasingly the norm:
"Real" were scarce and so they used this stuff instead.
The "national loaf" (brought in
As, to waste wheat, was a sin),
Was a husk-filled beige apology for bread.

Bananas...lemons...limes...
In these trickiest of times,
Could rarely be acquired for love nor money.
When they'd later reappear,
Many kids had no idea
What to make of them, and thought they tasted funny. 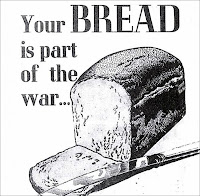 At cafes, folk would feed:
For their coupons here, no need.
A "British Restaurant" offered a good meal.
It cost a bob or two
(Seven pence to me and you),
Which seems a very reasonable deal.

One more "no coupons" source -
Not for patriots, of course! -
Was to buy things from a rogue "black marketeer".
To purchase from his stash

Needed lots and lots of cash,
And the penalties, if caught, were most severe...