Life on the Home Front - Part One

Stuff to eat was hard to buy

And the major reason why
Was that most of Britain's food had been imported.
So one had to get to grips
With the fact that merchant ships
By enemy torpedoes were now thwarted.

With their coupons women queued
At the local shops for food:
The allowance for each person was quite small.
And it served well in the end
To become your grocer's friend
For the bit of "extra" added to a haul.

"Dig for Victory" inspired,
So allotments were acquired,
Thus allowing lots of folk to "grow their own".
Those with gardens forsook flowers
And instead spent outdoor hours,
Tending all the cabbages they'd sown.

As men went off to face
The Germans, in their place,
Young women had to work hard to fill in.
In factories, they trained,
Tilled the soil - some entertained
(Especially if their name was Vera Lynn)... 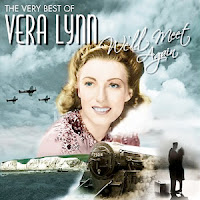