Some fishing boats set sail.
The wind blew up a gale.
The fleet was sunk and lots of lives were ended.
With so many menfolk lost,
Enormous was the cost 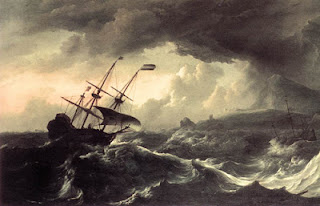 To the village, which on herring had depended.

This was 1838.
The need for aid was great.
In response was formed a charity of note.
Somewhere out at sea
Is not the safest place to be.
(That is why you'll never find me on a boat.)

There will always be disasters,
For our waters are the masters,
Regardless of precautions that are taken.
Britain needs its merchant fleet...
Those who catch the fish we eat...
And SMS ensures they aren't forsaken.

The Society is there,
For those in want of care,
Those who struggle, who financially are squeezed.
Twice-yearly grants are paid,
Or else one-off cash gifts made,
Which mean that daily worries can be eased.

Anyone at all
Who has braved the wave or squall,
Deserves at times to have a helping hand.
The Society's a friend
I would gladly recommend,
(From one who'd rather stay upon dry land.)


The Shipwrecked Mariners' Society was founded in 1839, the year after the North Devon fishing fleet disaster. The young Queen Victoria was its first patron, and it has enjoyed royal patronage ever since. HRH The Princess Royal is its current patron.

In order to be able to provide much needed help to eligible seafarers, SMS relies on donations, on an annual Christmas appeal (great cards), and on fund-raising activities.

Further details about SMS can also be found on its website www.shipwreckedmariners.org.uk

I first became aware of the society when I heard about its inaugural limerick competition last year, which I entered with the following:

The swell and the towering wave,
Cover many a seafarer's grave,
So to land Britain's dish,
(What are chips without fish?)
A man must be strong, skilled and brave.