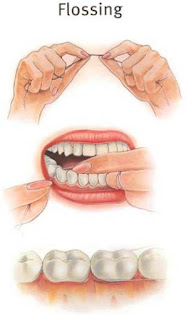 They were self-proclaimed regular flossers,
He and she formed the most irksome team,
Obsessed with their dental regime.
Were there prizes for making folk bored,
This pair would have won an award.

"You need to work down, round and back,"
She'd declare, "to eradicate plaque."
On they banged about waxed thread or tape,
For keeping one's gums in good shape.
It was like they'd embarked on a mission,
To keep teeth in A1 condition.

We were stuck with them, each time we dined:
All tried different topics to find,
Though the chatter would always come round
To this marvellous mouthwash they'd found.
And the chef would be quizzed every day,
In case what he served caused decay.

So instead of our holiday bliss,
We suffered a fortnight of this.
But their pearly whites certainly glistened,
And now how I wish I had listened.
I mourn all those teeth I have lost,
Which I wouldn't - if only I'd flossed.
Email ThisBlogThis!Share to TwitterShare to FacebookShare to Pinterest