My brother and his family live in Bucklebury, which also happens to be the former home of Katherine Middleton, now Duchess of Cambridge. On the day of the royal wedding (two years ago tomorrow), celebrations in the village were widely covered by the world's media, and my sister-in-law Julie asked me to write a verse for the occasion. She read this out in front of several TV cameras, but we don't know whether it was actually broadcast anywhere! 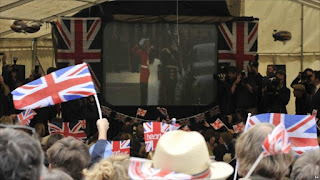 The marriage of our "local" - Kate.
Our village in the spotlight since
This neighbour upped and bagged a prince.

Once Buckleb'ry found sudden fame,
Things were never quite the same:
By Special Branch and press we're haunted.
We try to walk our dogs undaunted.

Despite the jewels and pretty frock,
In part, Kate is from humble stock...
The genes of those from down a mine 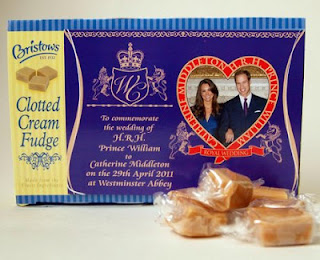 Will mingle with the Windsor line.
Her ancestors could scarce have thought -
Newkie Brown meets vintage port.

Since "Party Pieces" made some dosh,
Her family became quite posh.
The shops filled with a million Kates
On thimbles, tea towels, mugs and plates.

(The face, too, of our future queen
Was found upon a jelly bean!
Where else but England would they choose
To feature this as front page news?)

So after all is said and done,
We'll eat roast hog and have some fun.
What lies ahead is hard to tell
But, "Wills and Kate - we wish you well."

(and a welcome to viewers in India)
Email ThisBlogThis!Share to TwitterShare to FacebookShare to Pinterest