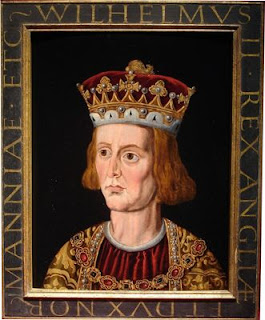 Protruding tum, quite short in size,
Of different colours, were his eyes.
His face was red. His hair was yellow -
So not the most attractive fellow.

As William Rufus, he was known,
He took only the English throne:
(The Conqueror's dual realm was split.
Big brother got the Norman bit).

Will lacked the diplomatic touch,
And isn't famed for very much.
He put down rebels, dealt with plots,
And managed to defeat the Scots.

He struggled with the church to boot:
His court was viewed as dissolute.
He had no children, had no wife,
(The sort you'd tell to get a life).

An arrow from a tree deflected,
Somehow with his lung connected.
He tumbled from his hunting horse,
So exit Will - quite dead, of course.
Email ThisBlogThis!Share to TwitterShare to FacebookShare to Pinterest