The Battle of Hastings - Part Two

...Without undue delay,
And recruiting on the way,
He returned to face the irksome claimant Will.
He planned the best of pastings,
As he camped inland from Hastings
And deployed his troops high up on Sentac Hill.

The Normans' battle forces
Rely a lot on horses:
Each cavalier his sword and lance now wields.
The English fight on foot,
And stubbornly stay put
Behind a wall of solid kite-shaped shields.

Two onslaughts they withstand,
Throw whatever comes to hand,
'til William's men all scurry off in terror.
It's tempting to give chase,
So the English leave their place,
Which proves to be a fundamental error.

Now the Anglo-Saxon hacks
With his trusty battle axe.
The soldiers on both sides are bravely trying.
Many Englishmen are gored
By a Norman lance or sword,
And through the air are scores of arrows flying...... 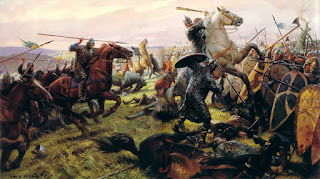