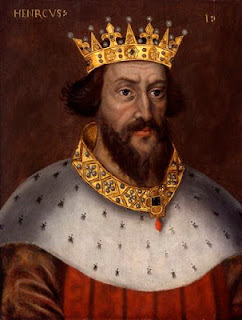 Young brother Henry next was king,
And seemed quite good at everything.
He made a careful choice of bride,
And got the English on his side.

The first, and the most pressing job,
Was fighting his big brother, Rob,
Whose lands in France he'd soon regain,
And so began King Henry's reign.

Quite contrary to Norman "norm",
His path was one of sound reform.
A scholar who proved very able,
He should have left this country stable.

His favourite food of eels he'd scoff.
A surfeit of them saw him off.
He'd no male heir and thus we'd see
A phase known as "the Anarchy".

(Children Henry had aplenty.
His offspring numbered more than twenty.
But though his seed was widely scattered,
They weren't legit - and that's what mattered.)
Email ThisBlogThis!Share to TwitterShare to FacebookShare to Pinterest