There were blackouts every night, 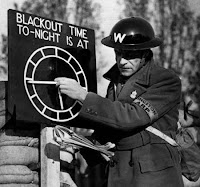 For the faintest chink of light
Might, for Gernman bombers, prove a useful guide.
That cheery local soul,
The warden on patrol,
Would ensure that all was glimmer-free outside.

When the air raid siren sounded,
People to the shelters pounded,
Except the very sleepy or less able,
Who might stagger out of bed,
And creep downstairs instead,
To take cover underneath a sturdy table. 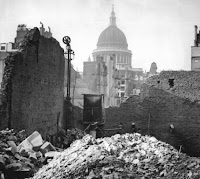 Of the bombs that were unloaded,
Some were not types that exploded,
But incendiaries that set the town alight.
The destruction of the Blitz,
Owed much to "Fire Bomb Fritz",
And the buildings that he managed to ignite.

To tackle this dire tactic,
A simple prophylactic:
The volunteer who'd keep us from the mire.

With some water close at hand,
And a bucket filled with sand,
He'd do his best to tackle every fire.