Welcome to viewers in Jamaica. We'll be adding your flag to "Hello World" soon!

The little pig is feeling "off": 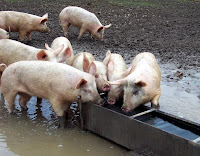 He has a cold. He has a cough.
But, even so, his food he'll scoff.
Watch him eating at the trough.

Daisybell, the Jersey cow,
Stands beneath a leafy bough.
She's looking at the farmer now.
He's making furrows with his plough.

In Spring, the field with seeds he'll sow,

And even though the wind may blow,
It won't take long for wheat to grow.
This crop makes flour. And flour makes dough.

The farmyard cats and dogs have fought.
They don't get on. They know they ought.
No peace they've sought: they like this sport.
To neither side is victory brought. 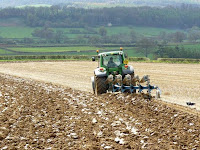 The goats the hanging washing chew.
A pillowcase they've bitten through.
They eat a shirt that's nearly new,
And swallow several blouses, too. 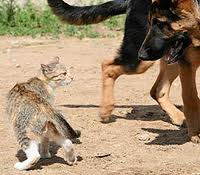 And finally, to be quite thorough,
These scenes are set in rural borough.
The ending of these words is "uh".
Can't think of any others - duh! 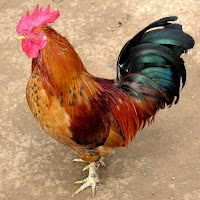