The Spanish Armada 1588 - Part Two - Action along the English Channel

Spain's fleet was slow to start,

(For the weather played its part),
Two months later, all the hype was slowly sapping.
Then in Plymouth (for supplies),
We were taken by surprise:
The Armada very nearly caught us napping.

Along the Channel chased,
Our speedy ships made haste.
There were inconclusive skirmishes en route.
Guns fired to no effect:
Abject failure to connect,
For no one's ships came near enough to shoot. 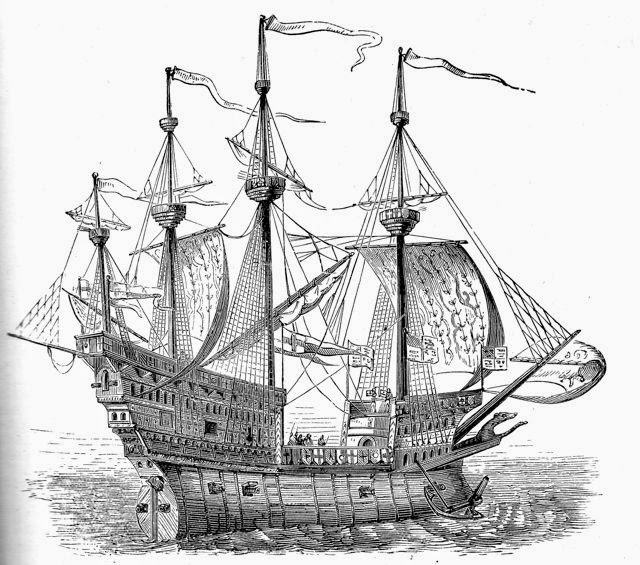 The Rosario was lost,
Which would prove to Spain's great cost.
With another Spanish ship, it had collided.
Not the blithest of collisions:
It was loaded with provisions
"We'll go and loot it!" Francis Drake decided.

In doing so, he'd find
How such ships had been designed.
He knew their guns weren't easily reloaded.
(Very soon, in battle proper,
When Spain's fleet comes a cropper,
Its ammunition's mainly unexploded

For its era quite "high tec",
An Elizabethan wreck
With cannons - all of standard sizes kitted -
Has been found. Now some allege
That our gunners had the edge, 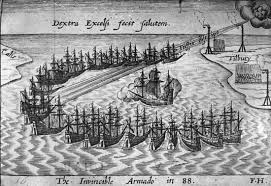 As they didn't have to seek a ball that fitted.)

The Armada we'd been dreading,
To the Isle of Wight is heading.
To settle in the Solent is the aim.
Safe, an army to await -
Invasion, England's fate! -
We do our best to spoil this little game.

Our sea dogs soon hold sway,
Drive the Spanish ships away.
In Calais, they hole up in strong formation.
This crescent shape holds steady,
But their troops are not yet ready,
Which causes them a lot of consternation.