Welcome to our new viewers from Kenya, Hungary, Angola, Luxembourg, Mauritius and the Dominican Republic. Your flags have been added to the Hello World blog from April 2013:


The English, in the night,
Set some ships of theirs alight,

(These aren't "hellburners", but give the same illusion.)
The trick is all that matters.
Spain's defence now quickly scatters:
As sailors cut the anchors in confusion.

Their ships are well dispersed,
The weather does its worst.
A south-westerly is blowing, right on cue.
Not the strongest type of storm,
But the Spanish can't re-form,
In spite of all their efforts so to do. 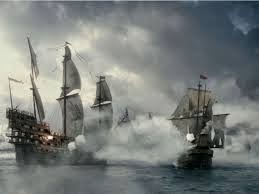 The fates seem on our side,
Near Gravelines the English ships close in.
In a bloody eight hour fight,
We get our tactics right,
And, in battle, just about achieve a win.

In large part thanks to Drake,
We'd known that it would take,
Too long for all their guns to be re-packed.
The English do just fine:
Aim below the waterline -
Which weakens ships whenever they are whacked.

As each English shot connects,
Our foes are thinking "decks".
They plan to fight according to tradition.
It's a scheme that's badly flawed
For they cannot get on board.
This in part expains the failure of their mission.

With success within our reach,
Our monarch makes a speech.
Great victory her navy soon will bring.
A brave queen's at the helm,
Telling all, "Hands off my realm!"
That she has "the heart and stomach of a king."