A blow for Spain's been landed,
And the fleet is somewhat stranded.
They wonder now, "Whatever's to be done?" 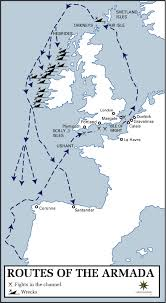 In the midst of the North Sea
Isn't where they'd planned to be:
They're far from home, pursued, and on the run.

They are chased much further north,
Up to the Firth of Forth.
They're using chains to hold ships' hulls together.
They struggle on and on.
Too far leeward they have gone.
And now they're at the mercy of the weather.

For Spain, the men all yearn,
But there'll be no quick return:
Round Scotland and round Ireland is their route.
Their vessels - worse for wear -
Need attention and repair,
And some are minus anchorage to boot.

Strong and chilly gales,
Are filling Spanish sails.
Ships are wrecked. There is no water and no food.
King Philip is sent word,
Of all that has occurred,
Which puts him in a pretty awful mood.
Those who made it back still die,
(Disease the reason why).
There is no happy ending to this story.
It's tedious. It's war,
And though both sides try to score,
Neither wins the triumph or the glory.

At odds, we would remain,
Throughout Queen Bess's reign,
The breakthrough in the struggle proved elusive.
Hostilities would cease,
When James the First made peace,
But, as things turned out, it wasn't that conclusive.

What we'd learned from the Armada
Was "We really must try harder",
Though our sailors had proved skilful, shown such pluck.
Our way of life could vanish:
We might all be speaking Spanish,
If we hadn't had a massive dose of luck.