Ella was shopping with Daddy. 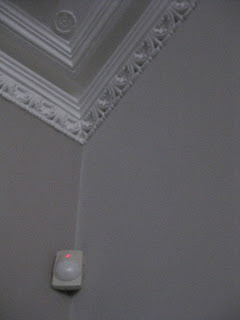 She wasn't behaving at all.
An assistant advised her, 'Be careful!
There's a camera up there on the wall.

It's a Santa Cam. Watch what you're doing.
See the little red light that is blinking?
It means Father Christmas can see you.
"Is she worthy of presents?" he's thinking.'

The tantrum was instantly halted.
Thoughts of Santa Claus watching seemed scary.
Ella was no longer naughty,
But angelic - and ever so wary.

Father Christmas, it seems, has things covered.
There's surveillance in many a street.
And kids who were once quite demonic,
Turn all "Stepford" and perfectly sweet.

When she visited us next, her first question 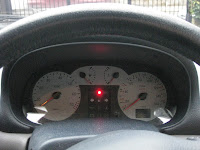 Was 'Is there a Santa Cam here?'
Then she noted, high up, several sensors,
On which a red light would appear.

Our alarm system thus gained new purpose,
Was the object of many a glance.
She might contemplate hitting her brother,
Then decide she could not take the chance.

Will it work again this year? we wonder.
It seems quite effective thus far.
And Freddie's seen lights on the dashboard,
So he thinks there's a "cam" in the car!